The top Considerations in selecting a viewer are:

See tabs below for more

LEDs are taking over as the preferred lighting source for industrial x-ray film viewers, as they produce a bright, uniform luminance that is perfectly suited to x-ray film viewers. Today, they are our recommended light source.

Historically, incandescent lamps such as photo-floods, were used as a light source that produce more heat than light. Viewers were large and heavy to accommodate cooling. They ran hot, and bulbs burned out frequently.

Over the years, other light sources (such as quartz halogen projector bulbs) have been used that offered some nominal improvements. Compact fluorescent tubes were introduced in the past decade. They were a breakthrough, as they produced little heat and allowed illuminators to be made more compact.

In addition to LEDs pure white light, the life expectancy of LEDs is around 40,000+ hours, eliminating the need to stock spare incandescent bulbs that are becoming more expensive, harder to find, and eventually will become obsolete.

LEDs produce virtually no heat, so LED Film Viewers can be made much more compact since there is no need for a large fan. Plus, the distance of the LED to the viewer screen is much less than that required for incandescent lamps. For example, a 14″x17″ viewer that used to have an approximate depth of 12 inches is now approximately 4 inches.

Uniformity of illumination is greatly improved as LEDs are distributed evenly across the viewer window. Therefore, the intensity near the edges of the view window is more similar to the intensity in the center of the window.

The needed brightness depends on the density of film you need to view. In calculating the intensity requirement, maximum film density is often spec’d at 4.0 D , which requires 100,000 candela/cm2 of luminance (see table in next tab labeled Density).

Since LEDs will dim as they age and as a function of how they are used*, we recommend a viewer that is 1.5-2x brighter than required. This will put less stress on the LEDs, and even if the LED does age, you should have sufficient reserve intensity to compensate for many years.

In other words, even though LED’s are rated to 40,000+ hours, if you use your viewer running it at maximum intensity for long periods of time, you may need to change the LED board in 3-5 years.

Film viewers should have the intensity to read a 4.0 density film (according to many common specifications). *

Luminance is the brightness of a surface such as a PC monitor or Film Viewer. **
Current specifications require x-ray film viewer intensity to measure in Luminance. The recognized scale is cd/m2 (Candela / meter2). ***

The following are the current requirements: 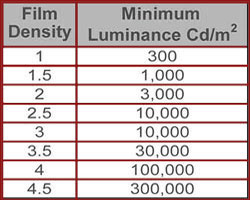 Note: Measuring Luminance requires a Luminance Meter. Note: Conventional Light Meters measure Illuminance not Luminance. There is no conversion possible between Ft/ Candles or Lux (which are measurements of illumination and µw/cm2, which is a measure of luminance.

Many people are not familiar with the difference between luminance and illuminance. These are two different systems.

Luminance: The brightness of a surface such as a viewer or computer monitor.
Luminance is measured in Candela/cm2 or Foot Lamberts.

Illuminance: The brightness at a distance from the source.
UV lamps are typically required to have 1,000 µw/cm2 at 15″.

A conventional light meter is designed to measure illumination in ft. candles or lux.
These light meters cannot be used to measure a film viewer, because there is no conversion factor.
A luminance meter is required. Example:Spectronics AccuMAX Luminance Meter with XS-555 Visible Luminance Sensor.

* FIG 1 of ASTM-E-1742 indicates 4.0 density requires 100,000 candela/m2
** Illuminance is used to measure lighting intensity such as UV and White Light lamps. There is no conversion possible for Luminance to Illuminance.
*** Illuminance values (Foot candles and/or LUX) for measuring Luminance is no longer recognized.

What is the environment where you would use your illuminator?

Could the conditions be somewhat wet? An example might be a mobile darkroom. Are you viewing wet film? If so, you run the risk of voiding any warranty on any viewer not specifically designed for wet use. Older style viewers (Photo Flood type) are more tolerant of moisture than LED viewers that have sensitive electronic circuitry.

We offer Drip guards for some viewers to minimize the risk of getting water into the viewer. It does not protect from chemical fumes that cause oxidation and chemically attack the electronics and structure of the viewer. Water and chemical damage is not covered by warranty.

Viewers made with stainless steel housing and hardware will withstand the corrosive environment present inside a dark room. Sealed viewers are also preferred for this application.
TheKowolux M1 and M2 are our suggested viewers for use inside Dark Rooms.

What size film do you need to view?

It is important to think about this before deciding on a viewer. The viewer window should be large enough to minimize the need to move the film, while being compact enough for the space allocated.

If you are traveling with the viewer consider one of the compact and light weight LED Viewers offered.

LED viewers with large viewing areas used to be cost prohibitive; they are now more affordable.

You should select the size to fit your needs and budget.

Do you need portability, and to what degree?

LED and compact fluorescent viewers are smaller and lighter than conventional Viewers. The strip film viewers (on the left hand column of the Strip Viewers and LED Light source page) are the most portable Viewers available. TheFV-2013is the most compact and is battery/AC powered.

Just like with automobiles, film viewers vary in quality. Some differences  you can see and experience immediately, while others may become apparent over time. For instance, some brands of viewers seem to have less of an issue with LED aging.

Some manufacturers may apply a higher voltage to the LED to maximize intensity instead of using a higher intensity LED. If a user consistently runs these viewers at maximum intensity, the LED’s will dim over time.